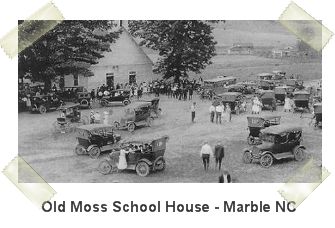 Marble Springs Baptist Church was organized on June 16, 1873 at the Old Moss School House in Marble, North Carolina (Cherokee County). The original congregation was comprised of 24 members. These charter members came mainly from Valley River Baptist Church of Andrews, and the new church at Marble was first called Second Valley River Baptist Church. On February 16, 1875 the church's name was changed to Marble Springs Baptist Church. Twenty years later, in 1893, the congregation had grown to 114 members. By 1913, it had 284 members. In July 1996, in its letter to the Truett Baptist Association, the Marble Springs Church reported 417 members. On September 15, 1894, the church unanimously agreed to build a church-house. A building committee and a finance committee were appointed and, a year later, a white, frame church building was completed at a total cost of $700. In 1915 collections were being received to build a belfray and to purchase a bell. 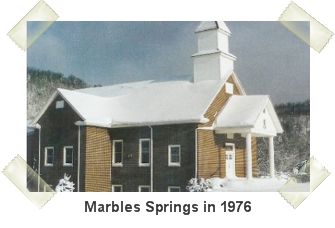 Years passed and it became evident that a larger, more permanent building was needed. In 1949, Mrs. Iowa Kilpatrick donated a building lot, a building fund was again established, and the new building was erected later that same year with members doing much of the work. In 1956 the church built a pastorium. In 1976 a large addition was made to the 1949 building. On the upper story were added four Bible Study rooms, the pastor's office, a library, two restrooms, a music room, and a baptistry. The lower level consisted of a kitchen and fellowship hall.  In 2000, the most recent building change was completed with the addition of a new sanctuary which is now connected to the front of the old church. The addition included a new baptistry and state of the art sound system. The old sanctuary is now used by a variety of active ministeries and groups within the church including our Faith Finders youth ministry.

Marble Springs is a missionary church, supporting missions faithfully at the local, associational, state, convention, and world-wide levels. On November 18, 1934 the church adopted the Cooperative Program (the Southern Baptist Convention's systematic approach to missions support) as its major channel for missions giving. The church, however, has never limited itself to this method of missions involvement but exercises local church autonomy to make decisions regarding other missions activities also. Both preachers and missionaries have come from the church's membership. All facets of the church's endeavor are guided by this missionary purpose.